Established in 1989 and named for inventor and Nobel Prize winner Guglielmo Marconi, the Marconi
Radio Awards recognize overall excellence and performance in radio.

The National Association of Broadcasters (NAB) presented the 2022 NAB Marconi Radio Awards during
a dinner celebration held at the Javits Center at NAB Show New York. The ceremony was hosted by
media mogul Nick Cannon with entertainment from VERZUZ host DJ Scratch. Also at the event, awardwinning
radio and television personality Ryan Seacrest was honored with the Distinguished Service
Award, the NAB’s highest honor, which recognizes those who have made a significant and lasting
contribution to the American system of broadcasting.

Big River Broadcasting was honored to have two stations recognized as finalists this year.
WXFL-FM was 1 of 5 small market radio station finalists.

WQLT-FM was also a finalist for a Marconi in the "Classic Hits Station of The Year" category.

" As Big River prepares to kick off its 50th-anniversary celebration, we could not be happier with the
recognition as finalists for both WXFL & WQLT. The contribution from each and every member inside
our four walls goes into making our brands what they are today. We are extremely humbled, thankful,
grateful, and appreciative of the highest level of recognition from the industry. "
-Chief Operating Officer Nick Martin
"Big River has had several nominations over the last few years for both WQLT and WXFL.
To say that I've been proud of each one is an understatement. The work I get to be a part of with this
team on these stations has defined me for 25 years. I believe with all my heart that these teams deserve
every single recognition they get. To be nominated for this NAB honor puts us over the moon every
time. But this is what it looks like when you're nominated, and then find out you won, but you couldn't be
there because you had to move to Houston to begin the next leg of your cancer treatment.
You have a fantastic team of people who will find a way to make you a part of the moment!
Winning this award is an amazing benchmark in my career. It's the highest honor I've received in my
work to date." - Operations Manager M. Fletcher Brown

"This is the highest honor you can receive in radio......Rock On." - President Jerry Phillips 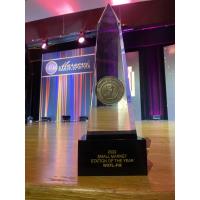